Instructions for making the traditional Russian one-grip snath (with wrap-around grip) were translated in this earlier post. Here's a recap: The grip is made from a freshly-cut branch that is bent around the snath and secured with a piece of twine.  Willow or wild cherry is suggested, with a diameter of 25-30 mm and a length of 350-400 mm. The size of the cutout portion in the middle depends on the diameter of the snath, but is typically around 80 mm, with a depth that's less than half of the branch diameter. A groove is made within the cutout portion, removing the pith and the center of the branch to accommodate bending without breakage. Grooves are carved around each end of the branch to hold the twine in place, once the handle is bent around the snath.  A thin piece of rubber (like a scrap from an inner tube) between the grip and the snath will make the connection more secure during use.

The drawings appearing above are linked images from the Russian site Pandia.ru and originate from a magazine article titled кoси, кoса by Н. Н. Рoдиoнoв, appearing in the journal Сделай Сам (Знание) 1992-02 [journal name translated as DIY (Knowledge)].

With some willow branches from my backyard and a few hand tools, I tried to make one of these Russian snaths, and a couple hours later I was mowing with it. The willow for the shaft had been cut about two years earlier, so it was quite dry and surprisingly stiff. The handle material was cut a few days prior and was kept soaking in a bucket of water until used. I did have some difficulty getting the handle piece to bend sufficiently without breaking. After a few failed attempts, I learned that the central groove in the cutout section needed to be larger than shown in the drawing (at least for the willow I was using), to result in a thinner outside wall that bends more easily. A hook knife was useful for accomplishing this. 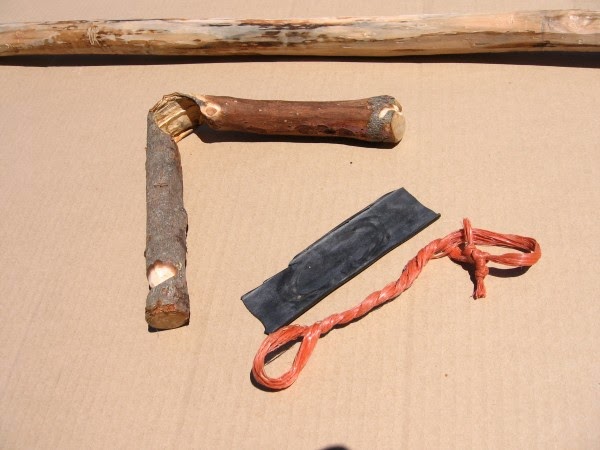 Materials used:
The selected branch had some curvature that was used as an offset to the right, which improves the balance (as described in this earlier post.) The piece of string was tied into a loop and then twisted to shorten it (resulting in a tighter grip when re-attached). The rubber was cut to size and used to prevent slipping between grip and shaft. 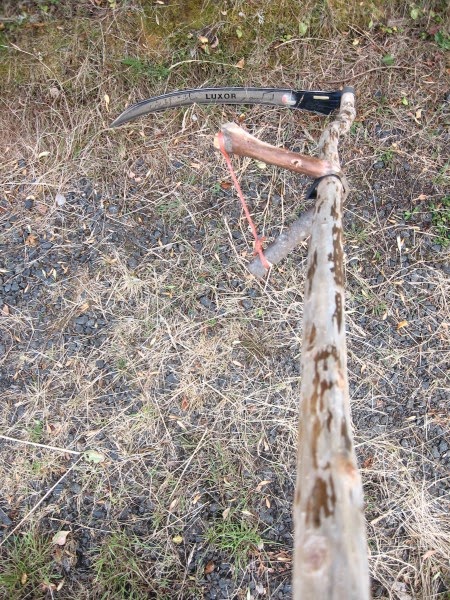 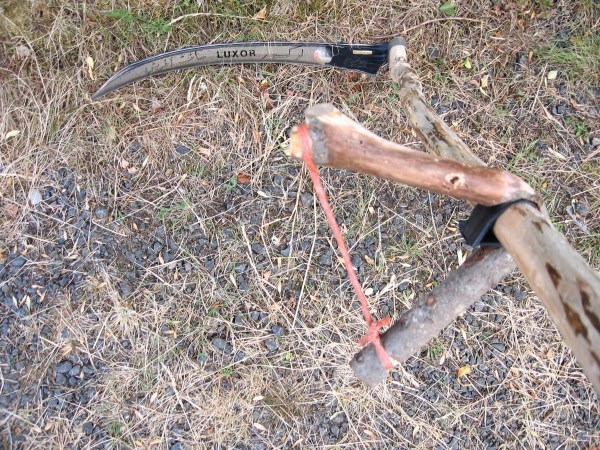 In use, I noticed a slight bit of play in the grip; it was not as rock solid as the drilled-and-glued grips on other snaths. I think this could be avoided by doing a better job of carving (to minimize the gaps between the grip and the shaft), and possibly by using a thicker branch for the grip (for more material to resist flexing). For the next one I make, I will try a larger branch for the grip, wider than the 30 mm shown in the drawing, which will be stronger and allow me to carve it down to customize the shape.

Scythes and the City

The city government of Zürich, Switzerland, has published a document titled 12 Golden Rules for the care, preservation, and enhancement of valuable natural areas in landscapes and residential areas (loosely translated here).

Golden Rule Number One involves the use of scythes:


1.  Mow grasslands with scythes and sickle bar mowers (and not with string trimmers or "shredder" mowers).

This rule is intended to minimize the harm to insects and other small animals. The other rules are summarized below:


2.  Stagger the maintenance, leaving at least 10-20% uncut until the next time, and leave borders along hedges and shrubs.

3.  Increase diversity of species by renouncing the use of fertilizers, peat, and chemical pesticides.

6.  Make sure that ponds and wetlands are amphibian-friendly.

9.  Cut back shrubs and bushes only during the dormant season (autumn/winter).

12.  Forgo irrigation, and use site-adapted plants.